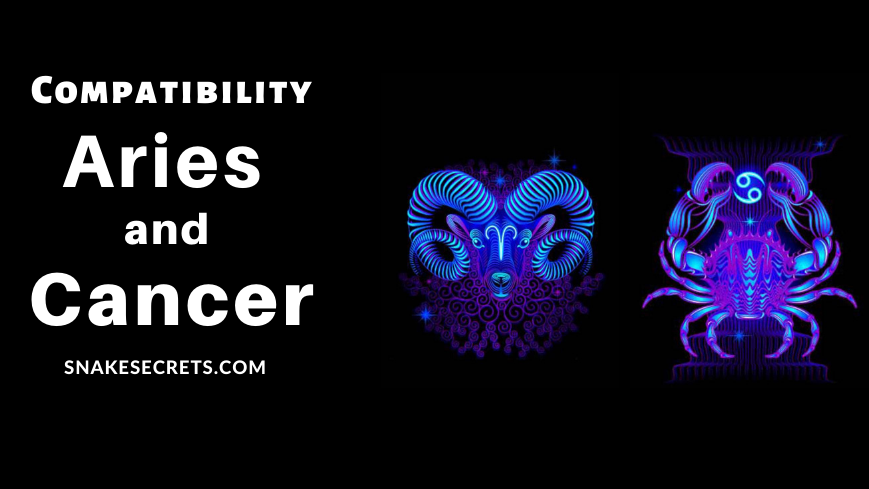 Compatibility between Aries and Cancer? The answer is a little tricky.

The blazing fire of Aries comes in contact with the flowing waters of Cancer: is there a possibility for a blissful coexistence, or are they likely to wreak havoc on each other’s lives?

Many astrologists tend to have a pessimistic view about the Aries-Cancer Compatibility of the zodiac signs, as far as the initial phase of the relationship is concerned. Despite the fact that the two signs have low compatibility scores, they can actually make things work for them. The stable disposition and temperament of both signs make it easy for them to find a middle ground.

The Aries are known for their high-spirited and boisterous nature, which can sometimes get annoying for others. Luckily, the nurturing nature of a Cancer can be used for guidance and support by the Aries.

Once both the partners are able to calibrate themselves at a balanced state, they can be perfect protectors and healers for each other during times of need. The opposite personalities of both individuals can sometimes get overbearing. This is the reason they should consistently re-adjust themselves to each other’s expectations and needs.

This is a type of relationship that has the potential to cover a lot of ground. The square nature of this relationship means: it can work like a charm one day, and can turn into a disaster the other.

Aries is fire and Cancer is water. The natural inclination of both elements is quite different from one another. So, you should always be prepared for an unprecedented conflict or clash when you are in the early stage of the relationship. Below, you can see the areas where you might click or clash.

Can Cancer and Aries last for a life?

Aries and Cancer have the potential to form a meaningful bond that can last a lifetime. The mutual respect and devotion in this relationship can open up endless possibilities of strengthening the bond.

The presumed impatient and intolerant nature of Aries is often misunderstood by many. Because of the fact that this sign is in the initial zodiac signs of the year, Aries individuals usually want to be first in everything and they don’t like to come second. Surprisingly, the loving nature of Cancerians comes in handy in such situations. Cancers have the tolerance and patience to face the impatience of Aries.

The competitive nature of both signs prevents things from becoming monotonous and boring in the relationship. Both of them can cheer each other up whenever the couple goes through hard and tough times.

When do Cancer and Aries fight?

There might be several topics of clash whenever an Aries-Cancer couple is formed. The brash and bold personality of an Arian can sometimes be too much to handle for an overly-sensitive Cancerian.

The cardinal nature of both signs can also act as a hurdle when there is a need for change. They would seldom be willing to alter their beliefs and thoughts about a certain aspect. Because of the fact that they are averse to change, they may not go through the hassle of adopting new habits and hobbies.

As mentioned above, the Crab might become frustrated when they notice that their partner isn’t yielding in any argument. The stubbornness of the Ram can sometimes not only be detrimental to the relationship, but it can also take a toll on his own wellbeing.

Most of the points of clashes are areas where both of you can work on. As long as you are not resting on your laurels for good, you would always have room for improvement. The couples should create a basecamp in the house where they can have a “me time”. This would help them regain their sanity during stressful phases of life.

Cancerians are highly asexual in nature and they don’t feel the need to be in an intimate relationship if there is an absence of love and tender thoughts. To them, there is more to sex than just physical pleasure and attraction. They might even not fully be aware of their true aspects of sexuality until they find the right person.

While we have Cancerians that cannot imagine the thought of having sex with someone without an emotional connection, Aries can pretty much hump any object that they feel attracted to. To crabs, sex is mainly about procreation and emotional involvement. Mostly, the rams cannot comprehend the thought of being gentle in an intimate act. While in bed, the crabs tend to be shy and submissive.

Trust is something that is never questioned in this relationship. Despite the apparent differences in the personalities of both the signs, they never doubt each other’s faithfulness.

The soothing and nurturing nature of Cancerians can sometimes be too unappealing for the aggressive Arians – especially when it comes to intimacy. Just like water, Cancerians would go through a fluctuating mood throughout a given month. This can sometimes be quite challenging for the Aries partner that is always trying to make sense of things.

The spontaneous and courageous nature of Aries individuals can sometimes come off too rude for their calm Caner partners. A sudden mistrust can develop if both the signs don’t fully recognize each other’s emotional and physical needs.

Despite the fact that many people have a perception that Arians are emotionless, they actually tend to be highly emotional in a different manner compared to their Cancerian counterparts.

Due to the fact that Aries don’t show their emotions easily, they can sometimes be seen as heartless individuals. They have strong emotional boundaries that they don’t allow others to cross over – unless they fully trust them.

On the other hand, Cancerians embrace their deeply emotional sides. They only cover it up when they are in unfamiliar surroundings.

It would not be an easy road to follow for the Aries-Cancer couple. It can be highly stressful for both of them if they are not willing to constantly work on the relationship.

Surprisingly, if they figure out the key to stay in the relationship, they can actually form an unbeatable team. Once they start seeing the good in each other, it would not be easy for them to be satisfied with a different partner. With the passage of time, they would start depending upon each other’s healing energies.

Despite all the differences in the personality aspects of this couple, it can work well for them. Each individual possesses some unique qualities that the other lacks. This would help them make up for all the defects and shortcomings that might be present in both of them individually.